This project is part of the new train station proposition for the city of Liberec,
the mixed purpouse high rise building is divided into two main
parts, the residential section on the upper part and office spaces on
the lower part. The 1st floor connects to the train station, acting as a
food court with direct access and visibility towards the train platforms.
Under this on the ground floor there is a fitness center for the residents
and office workers. The building is placed on the southern side of the
railway but it is connected to the northern side through the trainstation,
which serves equally as a pedestrian walkway. People can come from
either side of liberec, park their vehicles or arrive from the train station
or public transport system and find their way to their residence or office
space without a problem. The building is placed to be visible from the
street of prvniho maje, acting as a beacon for the new train station. On
the southern side the terrases are broken up on three parts, making
the building seem less tall and imposing for the surrounding residential
zones. Trees are placed on these balconies in big planters to help
de-mineralise the facade and to help create a nice space for office workers
to take a break. The offices are on the lower part of the building so
that the residential part can be as far away from the railway as possible.
The roof boasts a hottub and common kitchen with a beautiful view on
all of liberec and its surrounding hills. The design of the building follows the
idea of layers, the train station being the first layer and from there on we can
see full 360 degree balconies acting as layers set one on top of each other. 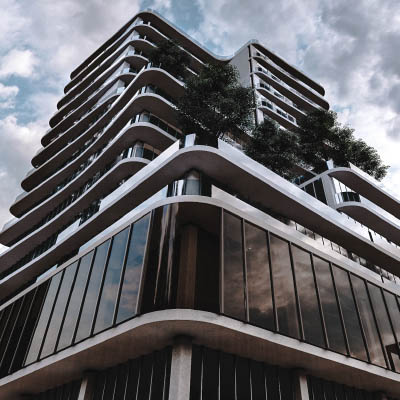